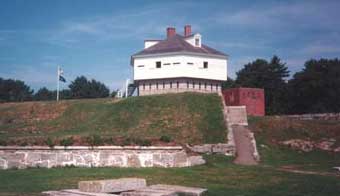 For more than 275 years, Fort McClary stood to protect the approaches to the Piscataqua River at the southern gateway to Kittery, Maine. Named for New Hampshire native Major Andrew McClary who died at the Revolutionary War's Battle of Bunker Hill, Fort McClary stands today as one of the state's most important historic forts that dramatically preserves evidence of military history and changes in military architecture and technology.

The buildings presently on the site represent several different periods of construction as the fort was upgraded and modified to meet the area's defensive needs. The site was manned during five wars – The Revolutionary War, War of 1812, Civil War, Spanish-American War, and World War I. Like most other Maine forts, it saw little conflict.