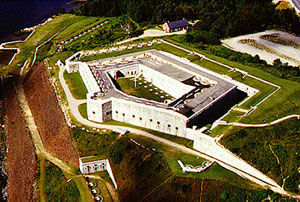 The fort was strategically located on the narrows of the Penobscot River to protect the river valley from naval attack. Although it never saw combat, Fort Knox was garrisoned during the Civil and Spanish American Wars.

Fort Knox bears the distinction of being Maine's first granite fort. About 500 troops from Connecticut were stationed here during the Spanish-American War. They lived outside the main fort structure in large tents. Today, visitors can stroll the grounds of this great fort and learn about the rich history of the troops who served to protect American interests during the 1800s.

The Waldo-Hancock Bridge has been replaced by the Penobscot Narrows Bridge and Observatory. The observatory and fort are now a combined visitor attraction.

Come explore the Fort and discover this treasure of Maine and United States History.

Fort Knox itself is open May 1 - October 31, from 9am to 6pm (9am to 7pm from July 1 to August 31). The observatory closes one hour before the fort. The grounds are open year round from 9am until sunset for your visiting pleasure. The newly constructed Penobscot Narrows Bridge boasts an observation tower, rising 420’ above sea level, which may only be reached through the Fort. The observation tower provides a breathtaking view of the Penobscot River Valley, and is the only observatory like it in the Western Hemisphere!

The main fort building measures 252 by 146 feet. The fort's two levels contain mounts for 64 cannons. Four batteries, with a total of 69 cannons, cover lines of defense. Visitors are welcome to explore the fort's passageways and many rooms. The fort also features two complete Rodman cannons. Guided tours are available daily during the summer season.