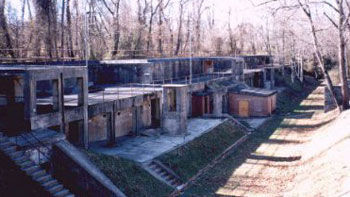 Fort Hunt was part of the Harbor Defenses of Washington D.C. and was commanded by Fort Washington, located across the Potomac River in Maryland. It was inactive between 1933 and 1942. Fort Hunt was used as a German POW camp during World War II. Previously called Battery at Sheridan Point and Sheridan's Point Post. Officially designated a fort on April 13, 1899, and named after Brevet Maj. Gen. Henry J. Hunt. All of the military buildings, except one, are long gone. The park is on the George Washington Memorial Parkway (which runs through the site) and is administered by the National Park Service.

Thanks to Phil Payette at American Forts Network for the above picture and information.

The George Washington Memorial Parkway manages this popular area. The park is open year- round, and has several picnic areas with a variety of facilities. Throughout the year, picnic area "E" is available to all visitors on a "first come, first served" basis. April through October, the park administers a picnic reservation program. For a fee, groups may reserve a picnic area for their exclusive use.

Beltway from Maryland to Alexandria, Virginia:

NOTE: George Washington Memorial Parkway, Mt. Vernon Highway, and Washington Street, are all the same road depending on where you are at the moment.

Beltway from Virginia to Alexandria, Virginia: