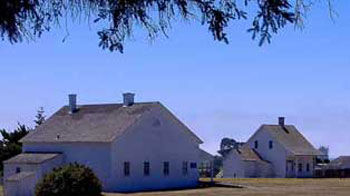 Fort Humboldt is situated on a bluff overlooking Humboldt Bay. This remote military post was established in 1853 to assist in conflict resolution between Native Americans and gold-seekers and settlers who had begun flooding into the area after the discovery of gold in the northern mines.

Later, Fort Humboldt would become the headquarters for the Humboldt Military District, which included Forts Bragg and Wright in northern Mendocino County, extending north through Humboldt County to Fort Ter-Waw in Klamath and Camp Lincoln near present-day Crescent City.

It was during its first few years that Fort Humboldt saw one of its most famous residents: the young Captain Ulysses S. Grant. After being decorated for bravery in the Mexican-American war, he was posted to several locations including Fort Vancouver in the Pacific Northwest. The isolation of Fort Humboldt did not appeal to Grant, and after serving as commanding officer of Company F for six months, resigned his commission.

Fort Humboldt was formally abandoned in 1870 and rapidly fell into decay. Today, only the hospital building remains out of the original fourteen structures. It is now a historical museum dedicated to telling the story of the Fort and the Native American groups, including the Wiyot, Hoopa and Yurok of this region. In the 1980s the Surgeon’s Quarters was reconstructed and there are plans for its establishment as a period house museum. In 2001 an historic herb and vegetable garden was recreated adjacent to the hospital.