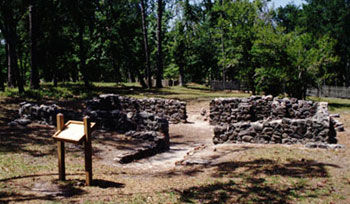 After decades of calm, the site once again entered the forefront of history in a national storm, the Civil War. In 1861 the Confederate States of America decided to build a large fort at the site as part of the river defense of Wilmington. The Cape Fear was an essential route for supplies moving by rail from Wilmington to Petersburg and Richmond for General Lee's army.

The Confederate army used manual labor to construct the large sand fortification originally called Fort St. Philip's. There were two batteries, each with five cannons, that overlooked the shipping channel and provided protection to blockade-runners.

In February 1865, following the fall of Fort Fisher at the mouth of the river, Union forces repositioned for an attack on Fort Anderson. Federals attacked from the land and river. After three days of fighting, the Confederates evacuated the fort at night. Union gunboats started firing at first light, unaware that Federal soldiers were breaching the walls of the fort. The infantry frantically waved sheets and blankets to stop the deadly fire from their own forces. There was a one-day fight north of the site at Town Creek before the Federals occupied Wilmington on George Washington's birthday, February 22, 1865.

The visitor center houses several displays that cover the time periods of both the old town and the fort. In the lobby is a colorful mural created by Claude Howell and Catherine Hendricksen depicting a scene from a Spanish attack on the town in 1748. A cannon on display was recovered from the river in 1986 and is believed to be from the Spanish ship Fortuna which blew up in the river as the townspeople regained control of the port.

The remains of homes, businesses, and other buildings bear witness to the story of Brunswick. Along with artifacts from the Civil War and the imposing mounds of Fort Anderson, this site offers a unique look at two fascinating periods of American history.